Warning: Invalid argument supplied for foreach() in /homepages/14/d405470941/htdocs/michaela/wp-content/themes/Michaela/public/single.php on line 1


Reshaping woman identity, showing the patriarchal and misogynistic beliefs we all come from, Sommer’s performance Allow us to transition from the commonplace to a new space.
She defies Patriarchal propaganda and reminds us that there is nothing natural about the unbearably sexist culture in which we live.

A competent, calm and powerful woman, ties up, dominates, inflicts pain and takes complete control over a strong, imposing male body (Fisherman on the first night and Fel the second).

The dancer, choreographer and rigger Dasniya Sommer presented quite an extraordinary performance at Rope Artists International, during the 15th edition of EURIX at Holzmarkt’s “Säälchen“ in Berlin.  Intense, disturbing, radical, perfectly structured, choreographed and interpreted “Blume Blume“ sweeps up our senses, challenges our beliefs  and moves our feelings with the intensity of a Caravaggio painting.

In front of these powerful images, we are forced to rethink where we are and where we come from.

While watching, I was constantly questioning what our society teaches us about our role as women. Early in life, we learn we should not aspire to take control or to be in charge.
As is portrayed in the media, in films and books and pop culture, we are reminded over and over, that we are not as able as men, who are naturally entitled to power while we are asked to remain silent, modest, delicate, beautiful and forever young.

Her graceful body doesn’t cease to show perfect precision and total control, confronting us with an alternative aesthetic and liberating us from the restricted and confined “traditional female role“ of male pleasing/reassuring. At the same time, the male body is displayed in a rather unusual and overtly sexy appearance: where the docile, vulnerable and passive model endures pain and subversively opens himself to forbidden pleasures.

Towards the end of the performance, the index of the “modern criminal encyclopedic“ is declaimed by a female voice and reminds us of the endless variety of females behaviours, that society has regarded as perverted: Nymphomaniac, Hysterical, Promiscuous, Lesbian, Murdered…
The bondage scene, often presenting obedient, small and docile women tied up by male riggers, showing off their technical skills and their dominant ‘nature’, seamed quite obsolete after this.

Dasniya Sommer’s ‘Blume Blume“ reminds us that the reign of Patriarchy is nearing its end, and with it, a society built on lies, dominance, abuse, reductive binary stereotypes and narrow-minded perceptions of life, collapses.

The future is bright. 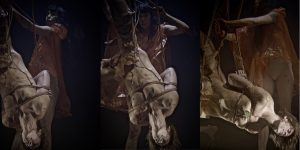